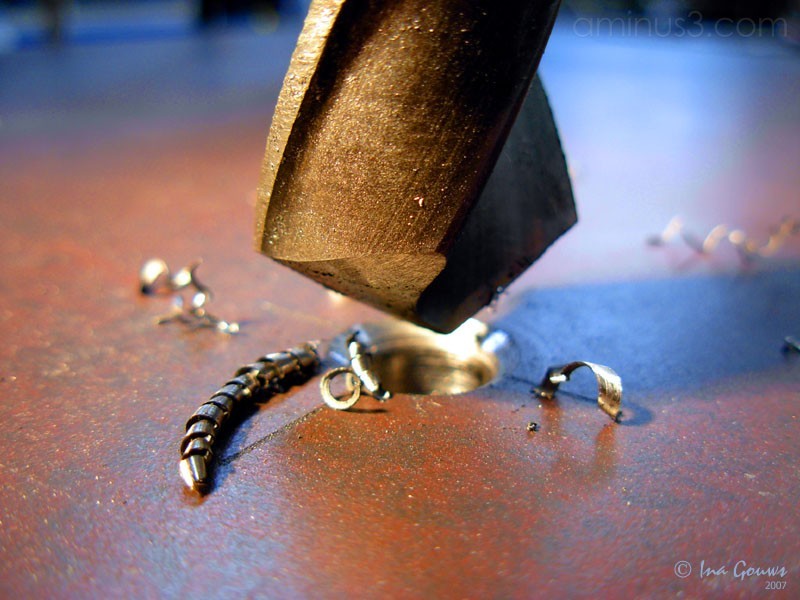 Previous Next
← previous day next day →

Posted by Ina (Krugersdorp, South Africa) on 7 December 2007 in Business & Industry and Portfolio.

“The expectations of life depend upon diligence; the mechanic that would perfect his work must first sharpen his tools.”
~ Confucius quotes ~

Your visit and comment means a lot, thanks for stopping by :)

Thanks for this fascinating picture!

@Illuci: You are welcome! I went to work with my husband and wandered around the workshop - when I saw the drill and shavings I thought it would make an interesting shot. It was like it was set up to be photographed!

Ina, I so love the blue and rust of this picture! good one!

Excellent macro. I love the colors too.

Your Right Ina, it was meant to be photographed. Maybe it's a guy thing but I like pictures of tools and craftmanship. Nice colors and composition. Well suited to the quote. Have a great weekend.

@Gary: Hi Gary - the tool thing is new to me, and I find it quite fascinating! You will definately see more in the future. Thanks for your visit and I hope you have a super weekend too!

i love the detail......
salam lestari

Excellent macro shot Ina. The idea and the colours are great

@Twelvebit: Second bit? Don't know what that means - but appreciate your visit and comment! :)

@Michael Rawluk: Hi Michael! Thanks again for your visit! Did not know a workshop can offer so much opportunities...

I wondered what that was! Cool macro! Wow you can do some amazing things with that point & shoot!

@Laurie: Thanks Laurie ! I like to challenge myself and my camera!

WOW your work is AMAZING!! I will definately be keeping up w your site!! Thanks for visiting mine and the nice comment you left!! Take Care!!

@Shades of Mandee: Thanks again Mandee! I realy appreciate your comments and visits. It will be nice to see you back again!

what a macro!
perfect deep of field and beautiful colors
Even if most of the time centering is a drawback, I think for the one it is perfect.

In further explanation of my cryptic comment, I meant that there is already a deeper hole with a smaller diameter than the drill bit in the photo, and that the bit in the photo was the second one used to make the "flange" for the previously drilled hole. It was also a rather feeble play on words --joke-- that the hole was "bitten" by the second drill.

@Illuci: Thanks for your comments Erik!

Well done, I like the light mixture. It makes for interesting tones, & highlights the shadow detail. Well seen!