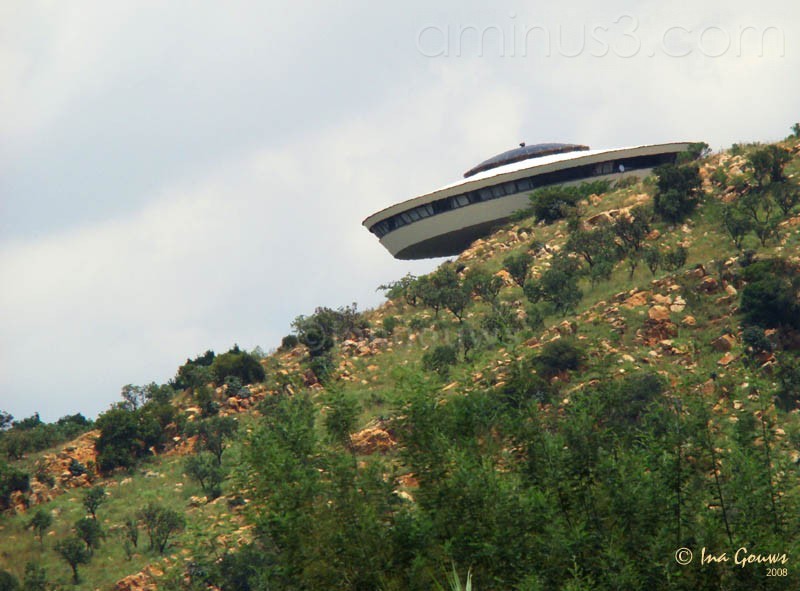 Previous Next
← previous day next day →

Posted by Ina (Krugersdorp, South Africa) on 26 February 2008 in Architecture and Portfolio.

This extreme house is found in Kloofendal Roodepoort (better known as the UFO house). I've tilted the camera a bit to create some drama! :)) You can see another picture and read more about some of the most extreme homes of the world here!

For those who are interested:
The house is based on eight columns with a ring-beam on top, keeping it in place. The diameter of the floor slab is 28m. A 100sqm tropical atrium lends privacy to the bedrooms.

In developing the project, the emphasis was to ensure and preserve the fauna, flora and the greenbelt environment. The main dish with its beam took 6 months to construct, after which 50 tons of reinforcing steel was placed and covered with 400m³ of concrete. Of the 76 windows, 40 are fitted with ventilators at the top to ensure that there is sufficient air flow. There are no windows that can open, due to the 60º angle and for security reasons.

The UFO house was built fifteen years ago but it is still very futuristic in its appeal.

During May 2002, an American TV crew took pictures for the channel: “The most extreme homes of the world”. This was broadcast on the 8 o clock slot, where this home was chosen to be the best. “Extreme Home of Africa”.

Your visit and comment means a lot, thanks for stopping by :)

Wow! You really created the drama with that tilt! Well done!

eheheh sure is a UFO! Interestinfg photo. Well done

(who wants a house there?)

How very neat of you...It was my first thought...little green men ;)

Cool, saw it once years ago, and nobody could tell me anything about it. Thanks for that. What would be neat with this shot, if you replaced the sky, with your lunar eclipse pic from last night.

@Graham Russon: This property is for sale for R14 million! Don't know if it is still listed - you can click on the photo to see more

I've taken this is bad weather, want to go back and 'redo'. You have a GREAT idea here... but I don't know how to do that! I've seen a photoshop tutorial somewhere, will see if I can find it on google. It will really look awesome... thanks for the idea!

Thank you for this discovery! It's amazing!

It already looks qute extreme, and if you can manage to put it up with your moon shots as suggested it will be a real UFO:-)

@vu@granby - Wolfgang Prigge: Will definately give it a try!

Very well captured Ina. Thanks for the information!

A very impressive shot, it certainly looks like it's just landed.

I enjoyed the image and the story very much Ina. This is very interesting. Thanks for a little fun.

The tilting of your camera definitely added a better overall effect. Thank you for the background info. I don't know if I could handle a home that didn't have operable windows. I think I would get claustrophobic.

The things people come up with...that we get to photograph! Haha